Woke up, ate some fruit.  The Dutch couple were getting ready for a beach hike.  I wished them well on their travel south.  The mechanic was cooking up some eggs and bacon.  Smelled good.  I gotta get those eggs today.

There was another old RV parked last night to my left, but I never saw the inhabitants.  She was walking a couple of huge old basset hounds this morning.  He was packing up the awning.  It was a red white and blue special, no doubt the bicentennial edition GMC from 1976. I’d never seen anything like it.  We chatted about it for a while.  This particular model has a following, much like VW Bus’s do.  It is front wheel drive, with duel rear freewheeling axles.  He went on about its low profile, and the aftermarket that’s developed for improved components.  I love how people are passionate about weird things.  I’m no different. 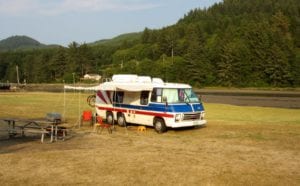 I packed up, thanked the hosts for running such a great campground.  The couple from Holland came back from their hike.  They said the beach hike was too far.  They decided to drive to the beach.  They asked me where I was going.  I told them about a waterfall hike about 15 minutes from here.  They perked up, until I told them it was only a quarter mile long.

I found the road to the Munson Falls trail.  It was a gravel road only a mile or so from the main highway.  There were about 5 cars in the small lot at the trailhead.  I put on my boots, grabbed the camera, and headed up the trail.  About halfway up I passed about a dozen people coming back.  One of them, in his twenties, consoling his slightly overweight friend, said that nobody over 35 could have made it as far as he did.  I asked him it that was a challenge as he walked by.

The “Trail Closed” sign mounted to the log fence that was at least another 1/4 mile from the base of the falls, took me 2 seconds to jump. It was clear the trail continues, so I kept going to get a better view.  About another couple hundred feet in it was clear the trail had ended.  I climbed over a few logs and rocks.  I snapped some photos and sat on a rock contemplating the falls.  Should I turn back?  If I kept going, what if I fell and hurt myself?  That stupid fear thing, “the parasite” that Don Miguel Luis writes about in The Four Agreements, was gnawing away at me.  I am finding that the key to managing my fear is recognizing and acknowledging it.  I told the parasite to fuck off, and started climbing. 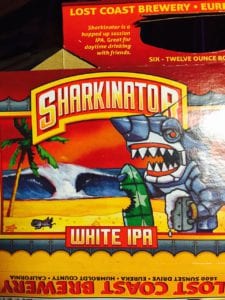 It took me about 10 minutes to pick my way to the base of the falls.  There were some slippery logs to deal with, and some sketchy moments, but I kept a handhold wherever I could and it really was a piece of cake.  As a reward, I stripped off down to my boots, and plunged into the falls.  Standing naked in a waterfall was one of the highlights of my life.  I lavished in the cool, clear water for at least 10 minutes. 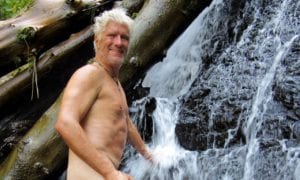 I put my shorts back on, carried my shirt in my hat, and sloshed back in water-filled boots.  As I descended the trail, it was obvious I had been in the falls.  I wonder how many people got to the end of the trail and decided to keep going, knowing there a way to get there.  I wonder how many went all the way after the trail ended.

As I sat in my bus relishing the experience, a young couple was heading from their car to the trailhead.  I called them over and hold them that if they were willing to scramble a bit, that they could get to the lower fall.  And that once there, nobody could see them.  They smiled that smile young lovers have.

I blasted passed the Tillamook cheese factory, but stopped at a local French Cheese shop.  They made their own brie, and also had local wine tastings.  I had a 5 wine tasting of red and walked away with a few bottles.  I also grabbed some sheep’s milk cheese and some crackers.  Something about wine and cheese in the bus. 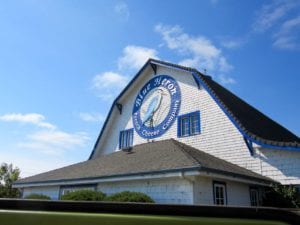 My next stop was Astoria, where much of the movie The Goonies was filmed.  It’s one of my all time favorites.  It captures the enthusiasm for adventure we all have when we are kids, but that we lose as we get older and fear of loss starts to grip us.  But first I was needed to eat.

I entered the Fort George Brewery.  They had a great selection of fresh beer.  I had a bourbon barrel-aged stout paired with homemade sage sausage with peppers and onions.  For dessert they offered a Samoan Cheesecake covered with those Girl Scout Cookies you can’t resist.  I finished it off with a pale ale.  And headed for the Goonies House. 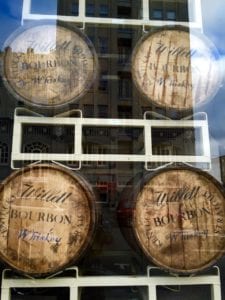 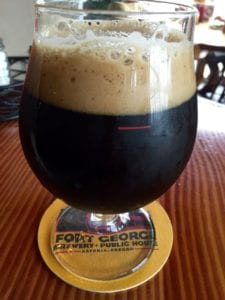 As I rounded the corner, the signs directed my to park by the school. The street on which the house resides was closed to traffic.  The city of Astoria has promoted the Goonies House for tourism purposes, and just celebrated the 30th anniversary of the film.  I circled around and looked for a place to park.

But as I did, I started to think about what the people who own the house think of all the attention.  I’ve always tried to respect peoples’ privacy.  I won’t interrupt a celebrity at dinner for an autograph.  And for some reason, despite my initial excitement about this phase of my trip, I was developing mixed feelings.  After some more thought, I decided I could live without the selfie in front of the Goonies House.  Here’s a link to all the photos of people in front of the house.  I won’t be adding myself to this gallery.

As I sit and write this, I just googled Goonies House for a picture.  And this article came up from today.  I guess my instincts were spot on.  http://www.kgw.com/story/news/2015/08/18/fed-up-owner-closes-iconic-goonies-house-visitors/31959307/

It was already getting dark, but I wanted to get to Washington today, so I headed across the Columbia River bridge.  It was dark and a little foggy.  Across the bridge I turned north and pushed into thick evergreen forests. It was going to be at least an hour or two before I hit another campground, and it was already 9 o’clock.  There was a very strategically placed rest stop, so I pulled in.  It bordered the river, and the sign said to keep stays less than 8 hours.  I decided this would be my spot for the night.  It was right on the road, so the traffic noise started out heavy.  And people were pulling in and out and talking loudly.  But eventually the noise died down and the sound of the water lapping at the banks of the river lulled me to sleep. 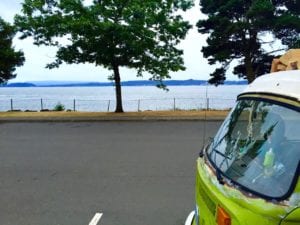 Posted in Only the Road Knows and tagged surf, travel
← In and Around Portland Day 19Props, Jets and Missiles in Oregon Day 21 →