Dan had introduced me via email to a couple of his friends that inhabited Vancouver island.  One of them was a blacksmith who Dan insisted was one of the coolest dudes he knew, and his sense was that we would get along great.  A few emails and text messages with instructions flew, and I pulled up to a house in the countryside of Dave Friesen.

As I got out of the van, Dave waved to me from the yard.  The house was on a large lot with a corral in the front yard, and a large outbuilding on the side.  We chatted a bit about my trip, and the conversation turned to his vocation.  I had never met a blacksmith before, and I doubt any of you have ever met one like Dave.

Saying Dave makes knives is like saying Michelangelo painted family portraits. Dave makes Japanese short knives, or Tanto.  These were the knives that Samurai carried as secondary weapons.  The end result is as much a work of art as it is functional,  but it’s the process he uses that makes his work extraordinary. You see, Dave lived on a small island in the heart of Japan for several years and his commitment to the craft is total.  His methods, tools and processes are the same as they were 500-years ago in feudal Japan.

He uses old, reclaimed materials, like steel from Calistoga wagon leaf springs, and wood from 19th-century structures.  His bellows is made from wood and paper.  He even makes his own charcoal.  He uses no electricity, and no modern tools.

Dave gave me a great and thorough tour of his tiny workshop, and then we made our way up front to his car where he had a few finished items.

Each knife is unique in its design and style while fitting within the historical accuracy of the tanto.  His work is stunning, and worthy of any art collection.  Please check out his website at The Island Blacksmith and follow him on Instagram.

As we stood by his shiny black truck, we were greeted by the turkeys that share the property with him. The Tom was especially interested in the reflection of himself in Dave’s truck; so much so that he decided his reflection was just a bit too much competition for him.  He put a couple of decent scratches in the mirror-like finish in a vain attempt to scare off his new nemesis.

As we scattered the turkeys to eliminate further damage, a herd of alpacas came running from the back yard into the corral looking to be fed.  Dave handed me an apple which I offered up to them.  They warily approached and took it.  And I snapped some closeups and video. 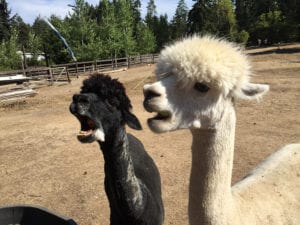 My first day on Vancouver Island was only just beginning and my life was being enriched by the hour.  I couldn’t wait to see what lie ahead.  I bid farewell to Dave, and pushed on towards Tofino.

On the way to the highway that would take me across the island I drove by an old rusted bus that marked a store that I had to stop into. 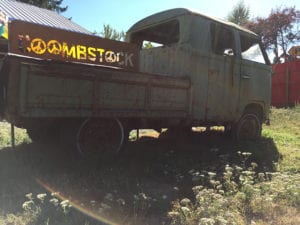 Coombstock was a hippy paradise.  They sold every manner of VW Bus merchandise you could imagine, along with beautiful hand-crafted leather goods, nepalese hand-woven garments, and some cheesy t-shirts.

I bought a cool VW Bus Rainbow coffee mug, and headed on.

For some reason, my expectations of Vancouver Island were of something smaller.  Even though I had spent hours combing maps, I just never got a sense of the scale of the place.  It’s huge.  And the scenery is breathtaking.  The road to Tofino was a windy mountainous one.  It tested the brakes on the bus.  The highway was in generally good repair, winding along a river that by itself was worthy of a week of exploration.  There were countless lakes and vistas.  If I stopped to take pictures of all of them I might still be making my way to Tofino.

The drive took about 4 hours.  Some of it was sketchy.  At one point I hit some heavy drizzle, and the road turned slick. As I braked approaching a hairpin turn on a downhill section, the wheels locked up and I started to skid into oncoming traffic.  I pumped the pedal, regained traction and narrowly avoided an untimely end, to the trip if not to myself.

I tensed up significantly after that and took it slow.  Tofino would be there no matter what time I arrived.

I pulled into Tofino around 11 AM.  It was cold, foggy and a light drizzle had dampened everything but my spirits. My first stop was a surf check.

The parking lot was full of surf vehicles.  This was a good sign.

I had heard about Tofino about 10 years ago, though I am not sure how.  It had dangled in the back of my consciousness for years.  Having learned to surf in the “relatively” warm waters of Southern California, which at first I found freezing having spent 7 years in South Florida, the notion of surfing in Canada was intriguing.

When I first set off on this trip, my terminus was to be Bellingham, Washington.  I figured I would visit Jon Howe, take a quick 10-mile jaunt across the border to Canada just to say I did it and then head home.  But somewhere along the way, pretty early on, Tofino called from my subconscious.  Next thing I know, I was at a Wal-Mart buying Crayola Glass Crayons and scrawling Tofino or Bust on my rear window.

As the Pacific Rim Highway reaches the southwest coast of the island it turns north towards Tofino.  Most of the peninsula that holds both Tofino and its sister city, Uclulet, are within the Pacific Rim National Park Reserve of Canada.  And within that stretch is a park beach appropriately names Long Beach.  In my research, this was one of the more popular (if not better) surf breaks.  I pulled into the parking lot, and decided to flaunt the authorities by not purchasing a parks pass just yet.  At this point I had not surfed in over 2-weeks, had only 1 surf in the last 3.  If this was a surf trip, it was a failure so far.

The promise of good waves had me as giddy as a bride on the way to the alter.  My dress was filled with down, and my veil was a beanie (or should I call it a touk now that I was in Canada).  I walked down the aisle strewn with pine needles instead of rose petals underneath a coniferous trellis.  As I emerged onto the beach, the view through the fog was of a stormy beach break.  It was decidedly less than epic.

A couple appeared next to me, and we stood there staring at the waves.  He asked if that was my van.  I asked him if there were any better spots to surf.  He said he’s checked pretty much the entire peninsula and nothing looked better.  His girlfriend asked if I liked music.  She said there was a music festival happening this weekend in Ukie, and that I should definitely go.  I filed that in the back of my brain, as right now I was preoccupied with surf.  Little did I know that my trip would soon take a dramatic turn based upon that tidbit of information.

We chatted for a few more minutes and I told them I had come all this way to get to Tofino, so I was going to head the final 10 or so miles to accomplish my goal.  I asked about camping and they told me to head up to the Landfill Road and there were plenty of old logging roads I could camp on.  I thanked them and headed north.

15-minutes later I was in Tofino.  My first stop was at a local coffee shop that roasted their own beans.  The coffee was fantastic.  Some of the best (and most expensive) I’ve had.  I was really encouraged by the fact that people were talking about the surf.  Tofino used to be a sleepy little surf town.  But I had read recently that it had become a tourist destination with people flying in for the weekend.  I was curious to see if it was able to retain its surf core.  Early indications were positive.

Up the road from the coffee roaster I spied a sign for the Tofino Brewery. I made a mental bookmark to check that out later and headed into town.  The downtown area is a dense 4 block zone of surf shops, adventure outfitters, cafe’s, restaurants and t-shirt shops. I parked the bus at the information kiosk, and spied a sister vehicle.  Funny enough it was covered with San Onofre Surf Club stickers.  Turns out the Tourism Tofino had leased the bus from Tofino Bus Services, who had just purchased it from an LA musician and car collector.

I wandered the streets for awhile and then decided I needed to get some ice and restock the cooler with food. I drive up to the co-op and spied this poster on the bulletin board outside the entrance.

This was the music festival the girl at the beach was talking about.  I couldn’t believe the lineup.  And I’d tried to see Nick Waterhouse about a half dozen times in southern California, but for any number of reasons it hadn’t worked out.  He’s from Huntington Beach, and if you haven’t heard his groove, check him out.

I ordered a ticket right there on my phone.  Camping was sold out, but I figured I’d cross that bridge when I came to it.  I went inside, got my provisions for the next couple of days, headed over to the liquor store for some beer and whiskey and the remaining ingredients for my boulevardiers.  The cashier was a surfer, and seeing my bus offered me some advice on where to look for waves.  I thanked him and headed back to town to wander some more.

Posted in Only the Road Knows and tagged surf, travel
← On to Canada and Hello New Friends!Day 2 Tofino →