I headed north on PCH, and it felt really good to be on asphalt. PCH rejoined US 101 and it was like being on a superhighway. I finally reached Oregon. 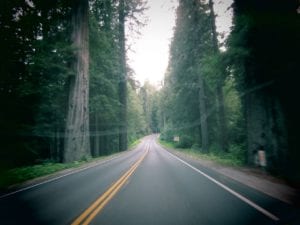 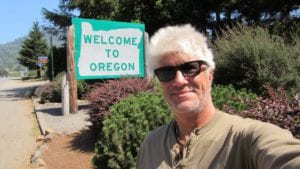 A herd of elk were trying to cross the road.

A few miles in I saw a sign for a tourist trap promoting giant concrete dinosaurs. Now I am not one to ever stop at tourist traps. But someone had posted on my Instagram account that I should stop and see the Dino’s, so I did.

$12 later I was strolling through a beautiful forest taking pictures of tacky fake dinosaurs. 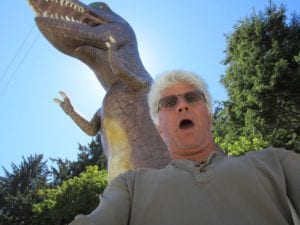 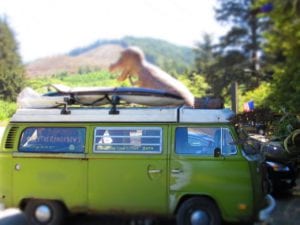 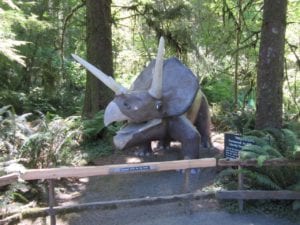 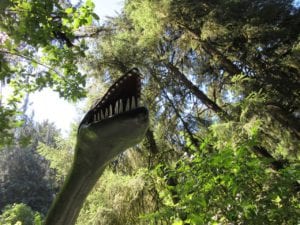 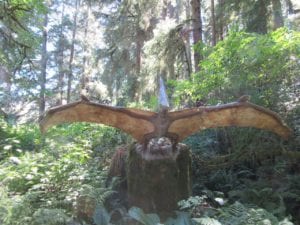 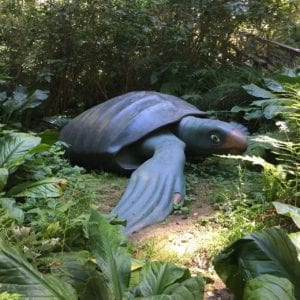 I was really chewing up some road today. The bus was in a groove. We were mostly hugging the coast, and cruising in and out of little towns. Each town had its own little charm, but they began to look alike after awhile. They each boasted the best crabs/seafood/chowder/fish and chips whatever in the Pacific Northwest.

I kept spying the coastline for surf, but everything was either small or windblown. I did find a magic spot that looked perfect right before US1 climbed inland, but access looked difficult and through private property. In hindsight I should have pulled over and knocked on the door of the little white house and asked permissions. Who knows, they might have welcomed me in. I promised myself that I won’t let fear stop me from pursuing those opportunities in the future.

I stopped for gas in Coos Bay, and the attendant (gas stations are full service in Oregon) noticed my headline ring was loose. I laughed and thought to myself that if that’s the biggest repair i need to make on the rest of this journey I am a lucky duck. I fiddled with it for a few minutes and after some creative hammering got it to say in place. I noticed that I had about a 1/4 inch of dust caked on the van from the Lost Coast, so I asked him if he knew of a self-service gas station in town. He pointed me to one just up the road.

I hate to admit it, but I’ve never washed the bus. Ever. I think I was afraid that the dirt was holding it together. But she earned a spa day. So I pulled into a car wash, loaded up with quarters and blasted away 3 days of dust and 7 years of grime. 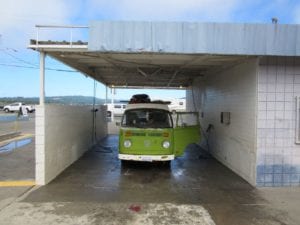 Time to look for a place to spend the night. There was a campground in the Oregon Dunes National Recreation Areas, so I pulled in and talked to the host. They had a site they were apparently having a hard time giving away. A couple of others had passed on it. I told them I wasn’t picky, and was only staying one night, so I’d take it.

The camp host had a beautiful garden.  One of the nicest Ive ever seen at a campground. They must have been here for awhile. 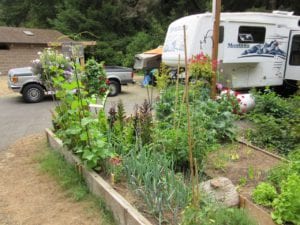 Turns out it was next to a large group of families crammed into one site. I am pretty sure there were 20 people staying there with a dozen kids aged 1-12. They were frolicking in a large sand dune that backed to my site. They were curious about the bus, and wanted to help me build my fire. I made quick friends.

After dinner, I took the fins off my short board and we all climbed the sand dune to see if we could surf it. I got one little run in, but after that things went downhill, and not in a good way. I wound up with sand in my mouth, hair, beard and other unspeakable places. We all had a good laugh. 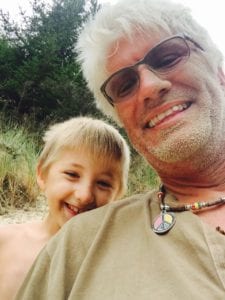 After a cold shower, it was time to retire. I was going to push all the way to Portland tomorrow in time to see my friend Steve White and his family over the weekend. And I really, really wanted to surf.

Posted in Only the Road Knows and tagged surf, travel
← Lots of Lighthouses and Finally Some Surf Day 18Portland to the Willamette Valley Day 20 →