I awoke about 90 minutes before the museum opened, and decided to drive about 10 minutes to find a Starbucks.  I didn’t know if I could make it waiting until the place opened to find a bathroom.  Wound up spending almost 2 hours catching up online and posting to this blog.  I’m increasingly surprised at how hard it has been to keep up.

The museum was definitely worth the price of admissions.  I took a free tour. All the docents were veterans.  The one leading my tour was an ex-aircraft mechanic, which allowed him to give an interesting perspective on the aircraft.  He talked about the different type of engines, radial vs inline.  How the improvements were developed from model to model and how that yielded increased efficiency in speed, or maneuverability in battle.

Most of the aircraft were actual specimens, but the two most historically significant, the Wright Flyer and the Spirit of St. Louis were meticulously crafted replicas.  The originals are at the Smithsonian, and this place caused me to add that to my bucket list. 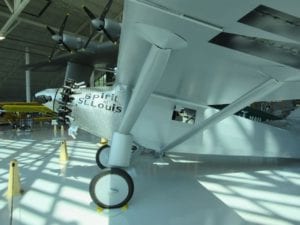 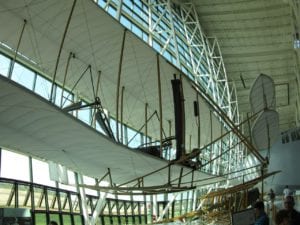 I passed on the $40 tour of the Spruce Goose cockpit (complete with corny photo op), but did get a glimpse into the cargo bay.  The fact that this thing ever got off the ground was amazing.  Even if it was only 70-feet. 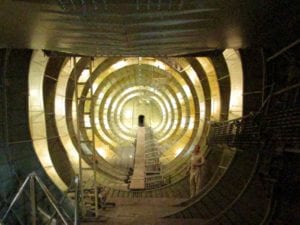 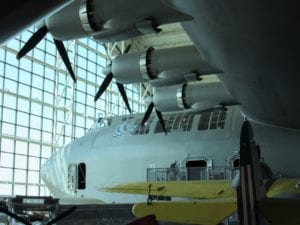 The Space Museum building had a weird aura.  I could feel the menace of the Cold War.  Maybe it was the actual Titan II missile in the silo ready to launch.  It was interesting, but I found it a little saddening at the same time. 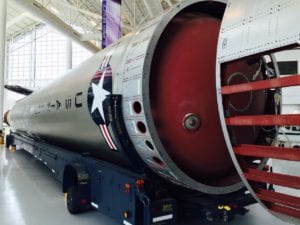 I grabbed an ice cream cone and a Cuban Panini, that was actually pretty good considering it was coming from a museum snack bar, and headed out to the picnic area to check in at home.  Sharon and I haven’t spoken much during this trip.  I think she’s trying to give me as much space as possible.  I appreciate and respect her for that.

I was on the fence about trying the water park.  They placed an actual 747 on the roof of the building, and replaced the emergency exit slides with water slides that looped back into the building.  I really wanted to do the slides, but one step into the park building convinced me that it wasn’t what I was seeking on my journey.  There were hundreds of kids, all having a good time, and verbally expressing their joy simultaneously.  I imagined it was louder than the engines form the 747. 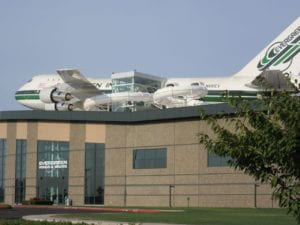 It was blazingly hot inland, so without the respite of the water slides, it was time to get back to the coast.  I headed southwest back to Pacific City to resume my trip where I veered off PCH.  And I’m glad I did. but more about that tomorrow. 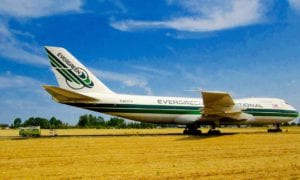 I made a quick stop at the Pacific City outlet mall.  They had a North Face Outlet I wanted to check out.  But after the deals at Columbia, nothing sparked my attention.  I checked out the Pendleton Store, and they had some beautiful blankets, but all were outside of my price/bargain range.  I picked up a t-shirt and some socks at the Eddie Bauer outlet, and headed north on PCH.

I had picked out a County Campground that was almost guaranteed to have space.  Sure enough I checked in with the camp host and about half the available 25 or so spots were vacant.  I picked one with a water view, and headed back to register.  The hosts were an elderly couple who had just been recruited back to this campground after the last host apparently didn’t live up to the high standards of the county.  These guys ran a tight ship.

“You know how much it costs”, the old man half-shouted.  “No, how much?” I replied.  “It’s expensive!  $37.50 per night.  You save a few bucks on the second night because there’s a registration fee.”  Wow, I thought to myself, that’s steep.  But I was here, and I would have burned $10 in gas driving around looking for something else.  I smiled and told him I was sure it was worth it.

I picked up a few bundles of firewood while I was there, set up camp, and started dinner. I split off some wood slivers for the stove from the bundle of firewood with a small axe I purchased before I left.  I was slightly relieved to retain all my fingers.   I had some Halibut I’d picked up somewhere along the trip, and grilled that on my wood stove with an ear of corn.  I also sautéed some Kale, Chard, Mushrooms and Carrots in butter with some garlic and onions.  It was a feast.

My neighbors were an interesting lot; a young couple from Holland, and another older couple from Colorado. The Colorado guy owned a car repair shop and was with a woman, much his younger, from Venezuela, who didn’t speak English.  I noticed his Spanish wasn’t the best either.  He railed on about how ObamaCare was costing him a fortune.  He asked me if i had pot.  Of course, anyone driving an old VW Bus with surfboards on top would have pot, right? I told him no, i didn’t really enjoy it, but I’m not against it.  “Why would anyone be against it, he asked, dismissing my pleasantry as if it was silly. He was originally from Coos Bay, and had family there he was going to visit.

I opened up my laptop, and he asked if I was a “computer guy”.  I told him I could fumble my way through.  Apparently his wife had done something on their Mac and deleted her profile, losing her password to Facebook in the process.  I poked around her profile was definitely not there, and without an internet connection I couldn’t show them now to recover a password.  I tried my best to explain it to him, but it was like telling a snake how to climb stairs.

The couple from Holland was way more interesting.  They were camping their way from Vancouver to SF.  They started at a wedding and had 3 weeks. They were serious hikers.  They hiked around Mt St Helens today, which is like 15 miles.  We had a lively three way conversation going that covered politics, economics and global warming. Holland is a democratic monarchy with socialistic economic tendencies.  The guy was like a younger version of the Most Interesting Man in the World, from those beer commercials.  His girl, who was at least a few years younger, maybe 10, was a cute little thing; very rugged, but had an air of femininity. They made a really cute couple. 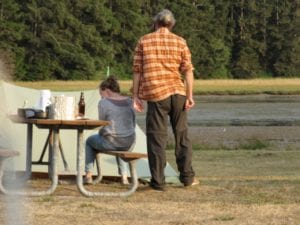 About 15 years ago, the most interesting guy actually walked from Holland to the El Camino in Spain. It took him 5 months.  He walked 20 miles a day, for 5 months.  I got a sense that even today, that’s his biggest accomplishment.  He was a humble soul, but he welled up with pride when he spoke of the adventure.  He said that after 6 weeks, your body becomes accustomed to the effort, and he was surprised how little food he required to sustain himself.  I think the Camino is on my list.  I first heard about it in a fantastic movie called The Way, starring Martin Sheen, and directed by his son Emilio Estevez.  Watch it.

It was getting late.  The mechanic had retired with his Latina companion, and I bid goodnight to the Dutch couple, put out my fire, and went to sleep.

Tomorrow I need to pick up some eggs to go with that bacon I’ve been carrying around for the last week.