Day 20, Monday had me off to the Apple Store to try to get a replacement for my iPhone, which had not gotten a cell phone signal since I entered the Lost Coast almost a week ago.  I had an appointment at 11:00.  They saw me promptly, and after a lecture from a twenty-something year old kid about how to manage my battery life, he gave me a new phone.  I then sat there for 2 hours as I restored the phone from my laptop backup.  Halfway through, I had to leave my stuff in the store and race down to put more money in the meter.  When I got back it was almost done.

Finally at 100%, with a working phone in hand, I circled back to the van through a park that held a farmer’s market.  I picked up a flat of berries; strawberries, blueberries and blackberries.  Back at the bus, I programmed the route for the Columbia Sportswear Outlet, which was just outside of downtown.  While I was here, I wanted to see if they had any more of the climbing pants I so loved.  When I packed, I only brought two pairs of jeans, to complement my 7 pairs of shorts. Not the best planning considering the cool evenings on the coast.

The Columbia outlet was everything I hoped for.  They had the pants I wanted, in a few styles and colors, and for 70% off.  I also picked up a jacket and vest for less than $30 each.  If you are ever around Portland, make the stop.

I looked for something to eat around the outlet, but all the restaurants were closed.  I’d been noshing on berries anyway, so decided to grab a Starbucks and catch up online.  I then jumped back in the bus to head back towards the coast, with one particular stop on the way. But she was fighting me as I tried to shift.  For some reason the clutch had tightened up.

I found a parking lot to pull over, laid the rug down under the van, and crawled underneath with my new vice grips that I picked up in Fort Bragg.  I gave the wing nut at the end of the cable a couple of turns, holding the step in place with the vice grips.  I went to the very end of the clutch adjustment. Jumped back in and took her for a spin.  Much better, but if the cable stretched any more I was out of adjustment room, and would need to do some modifications.  I made a note that if I hit another garage, to have them look at it.

My next planned stop was to get near the Evergreen Air and Space Museum in the Willamette Valley.

I had a couple of state parks identified on my map I was going to check out.  The first one was full, so I circled back to the one that was only about 20 minutes away from the museum.  I entered the park and there was nobody there.  As I approached the campground, the sigh stated that it was an equestrian camp, and you had to have at least one horse to camp there.  I looked around for a stray pony, but it was just me and my bus.  Rather than hassle, I moved on.

I decided to head to the museum and look around there.  Leaving the park, I hit a river, and had to take a small ferry in order to cross.  It only held six cars, and took about 2 minutes to cross.  It was tethered to an underwater cable, and used some kind of pulley system to move the ferry back and forth.  I found it fascinating. 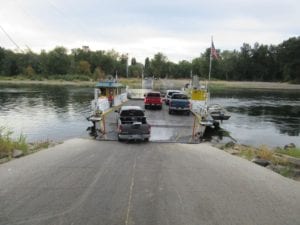 As we were crossing, I noticed several cars on the far riverbank that looked set up for spending the night.  I drove off the ferry and pulled over on the riverbed.  I walked up and said hello to a gent in an old Chevy Blazer.  He was sucking on a cigarette and holding a tallboy Budweiser.  He told me he has just moved his wife and kid back to Coos Bay, into a trailer, and was commuting to work in his truck.  He would find a place to sleep in the truck every night, and then drive back to Coos Bay on the weekends to see his family. The rent on the trailer was only $500 a month, his wife was happy there, and he was saving a lot of money.  A friend told him that he could camp on the river, as people did it all the time. 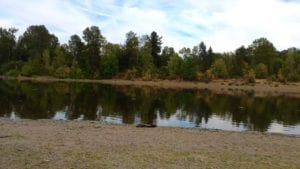 The evidence seemed to support his claim.  There were fire pits and vestiges of campgrounds everywhere.  I popped up the loft and set up my living room.  Rug, table, chair, beer.  I was ready for the night.  Before I could even relax, Smokey the Bear showed up.  Actually there were two of them.  One was a sheriff, complete with a 5-gallon hat.  The other looked like some kind of rent-a-cop.  Whoever chose his uniform had no taste or style, that’s for sure.

Mr. Bear approached me cautiously.  I’m sure the police force is always wary of 50-year-olds in old VW campers.  We could be high on anything, and attack them without warning, with a corkscrew.  I bid him hello, but he seemed unimpressed.  He asked if I was planning on spending the night. “Is that a problem, officer?” I inquired.  “Yes, it is.  You have to be out of here by 10:00 PM.  It’s an administration rule,” he added, as if that made it sound more official.  The rent-a-cop shrugged his shoulders.  I took that as a sign of willingness to negotiate.  “So, how strictly is that administrative rule enforced?”  The sheriff looked annoyed.  “You can’t stay here,” he shot back.  I thanked him and he moved on.

I sat there and finished my beer and watched the other cars pack up and roll back over the cobblestones.  The sun was setting, and I was out of legitimate camping options.  I decided to push on to the museum and check out the parking lot.  The place was massive, and something told me I’d be able to overnight there without hassle.

A short drive later, I pulled into the massive parking lot behind the central building that housed the Spruce Goose.

There was a large archway leading to a picnic area with the Boy Scouts motto carved into the cement.  Across the lot, there was a new Airstream trailer and a large RV with slide-outs in position.  I took this as a good sign.  But my paranoia was set in after my latest run-in with the law, so I did a quick Google search.  Sure enough there were several posts on TripAdvisor that confirmed you could spend up to 2-nights here, as long as you were self-contained.  I popped the top, and settled in for the night. 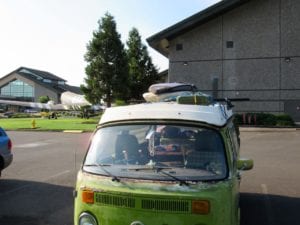 Posted in Only the Road Knows and tagged surf, travel
← Roadside Dinosaurs and Sand SurfingIn and Around Portland Day 19 →