Sunday started with breakfast burritos and plans to catch crab.  We plotted our trip on the map.  One of the cool things about the PNW, and the reason its a boating paradise despite the sketchy weather, is there are so many destinations.  So many islands, so little time. 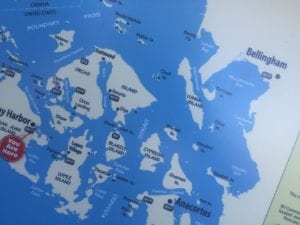 First I had to acquire a 1-day license at the local sporting goods outfitter.  A quick stop for some provisions: turkey panini, some fruit, beer, ice and bait and we were off. 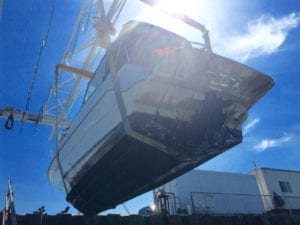 Jon’s boat is at a dry dock.  They trailer the boat to a crane gently lowers it into the water.  We loaded her up and headed across Puget Sound.  First stop was to drop the crab pot.  Jon stuffed the chicken thighs in the pot, attached the bouys, and dropped it into about 100 feet of water. We  hung out for a few minutes, I don’t remember why, but before we moved on, he decided to pull of the pot to check it.  Within a few minutes three red crabs had taken up residence.  It was a good sign.  He let it back down and we were off on the long ride to Friday Harbor.

Jon let me drive the rest of the way, which worked out for both of us. I love driving boats, have been doing it since i was 7 or 8, when my grandfather would rent a 10’ rowboat in Jamaica Bay Queens, and we would go fishing for flounder or porgies.  And Jon always has to drive when he takes him family, so for once he could sit back and relax. 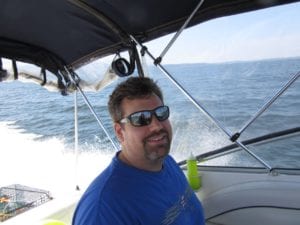 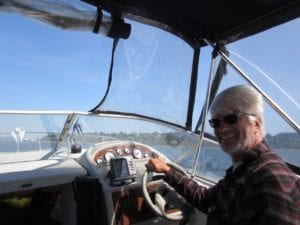 The trip to San Juan took about an hour.  We pulled up to the fuel dock, and asked for directions to the overnight slips.  She pointed us to a temporary dock, and we slid in.  A young lady in a red life vest assigned us to G19, which was on the other side of the marina. I spun the boat around, and we made our way to our spot for the night.

Once tucked in, we wound our way across the dock towards town.  The variety of boats up here was interesting, you can tell that the weather plays a factor in boat selection.  Lots of deep-V hulls, hardy cabin cruisers, and working boats for crab pots and fishing.  Much different than the day cruisers you see in SoCal. 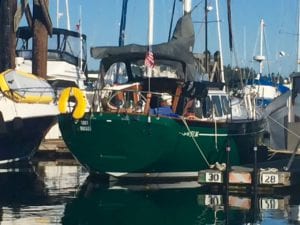 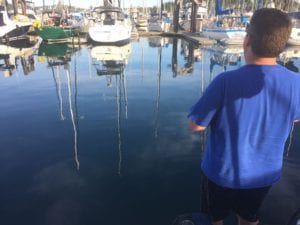 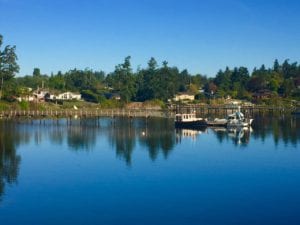 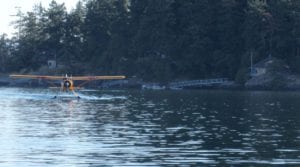 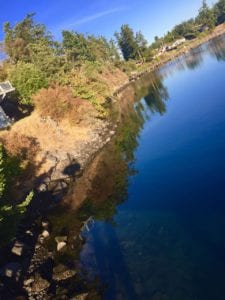 Friday Harbor is a picturesque town, close your eyes and imagine a pacific northwest harbor and you probably see it in your mind’s eye.  Pine trees lining a rugged coast with a protected bay, some rough-hewn log homes scattered amongst the conifers.  The town itself is geared to the tourists, mostly bars, a few souvenir shops hawking stuffed orcas.  We picked a bar that looked serviceable and ordered our first drink of the evening. I had my new favorite, the boulevardier, and Jon chose a margarita.  He was dying from the heat, which was a blazing 74 degrees.  I guess we all get conditioned to our environments.  I asked him how he survived in Phoenix, and he said “I moved from air conditioned space to air conditioned space. 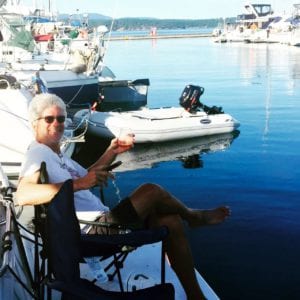 We found the local mercantile, where we heard rumors of a cigar humidor.  We nabbed a couple of stogies, and headed back to the boat to smoke and drink. We set up the camp chairs on the swim platform, lit up and polished off the remnants of a bottle of Whistlepig Rye.  Then we stumbled back to town for a place to dine.  We both had a hankering for sushi, but the lone sushi restaurant was closed on Sunday night.  So we settled for a nice seafood tavern on the corner.  I ordered the razor clam chowder which was amazing, and followed it with shepherds pie.  Washed it down with several more drinks and stumbled back to the marina.

The next morning we rose early and i headed into town for coffee.  The lone coffee shop had a line as you can imagine.  Locals and tourists alike were streaming in and out.  You could tell the locals easily, they would drop off their coffee mug on the counter, and then just take a seat, waiting patiently.  The barista, who was extremely efficient, would weave the local mug into the continued procession of tourists and occasionally call out, “here you go Susan!” or “here’s your vanilla latte Mark!”  Then Susan in her FedEx uniform or Mark in his fireman t-shirt would grab the coffee and leave.  No money changed hands.

There were a couple of young kiwi crew members with T-shirts emblazoned with the logo of a large ship in the harbor standing in line  One of them had a radio and was pacing back and forth outside. It seemed “the boss” was anxious to weigh anchor and move on. I tried to find out who “the boss” was but they pleaded confidentiality and wouldn’t say.  I asked them where their home port was, and they said they didn’t have one.  though the boat was registered in the Marshall Islands, they said they continuously circumnavigate the globe.  The ship was 134 feet, and today they were heading all the way to Seattle.  I am sure they had plenty of fuel for that leg.

I finally got my turn to pick up a cup of coffee and strode quickly back to the boat, as Jon was probably wondering what happened to me.  We untied and backed out and headed to top off the tanks at the fuel dock.  I pulled up next to the dock and started thinking too much.  I totally botched the approach. Piloting a boat can quickly become counter-intuitive.  When you are in reverse, the steering is backwards from that of a car.  But going forward it’s the same.  After about 5 failed attempts, I shut my brain off and let my experience nestle the boat into the dock.  The fuel dock lady was not impressed.  Nor should she have been.

Fueled up we headed out to drop our shrimp pots. Jon had a spot where he’d been successful in the past, with over a hundred spot prawns in only an hour.  I was excited to see how we did. The bay was like glass, and we made excellent time, skimming across the water like an olympic speed skater across the polished ice.

We baited the pots with cat food and shrimp bait, and threw them into about 250 feet of water.  We then just drifted, enjoying the serenity of the bay.  We watched a bait ball being attacked by all manner of birds, so decided to check it out.  We raced over just as it must have moved on, as the birds just spied us suspiciously.  There were seagulls and ducks and cormorants, and even a harbor seal.  We floated with them for a while until a few seagulls down the way started calling and all the birds rushed to their spot.  We raced with them, watching the ducks swimming underwater, keeping up with the boat at 25 knots.  It was amazing that they could swim faster than they could fly.

We watched the feeding frenzy and then decided to head back and check the pots.  Jon ran the rope around the electric pulley and wound up the pot full of shrimp.  It took a few minutes, and as the pot came into view our hearts sank.  It was completely empty.  The next pot was only slightly better, one shrimp, and a baby halibut.  I grabbed the halibut and tried to resuscitate him, and then dropped him back in the bay so he could swim and grow.  John peeled and cleaned the lone shrimp, and offered it to me as sashimi.  Our shrimp dinner was short but sweet. 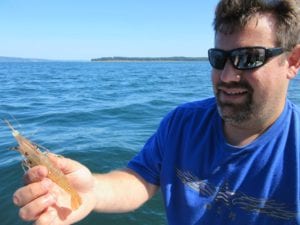 We had much better luck with the crab pot.  We pulled up 7 large Dungeness crab, all males.  Looks like we are having crab for dinner. 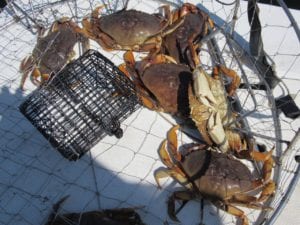 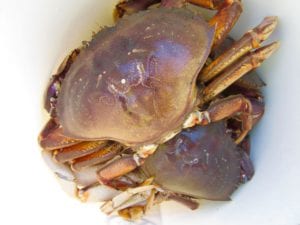 We raced back across the bay.  The wind had picked up a bit and the ride back was a little bumpy, but not too bad.  We made good time and were back at the house by 3:00.  The crab was delicious and we also got to taste some of Lloyd’s brisket, that had been in the smoker for about 12 hours. 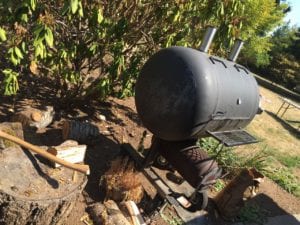 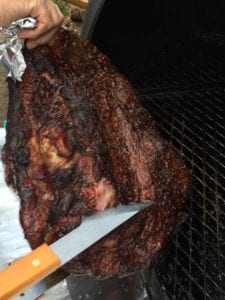 After dinner we piled in the van with the kids and headed to the local ice-cream parlor.  It was the perfect way to end a great day.

Posted in Only the Road Knows and tagged surf, travel
← The Thin Line Between Life and Death and Following Your DreamsStoked to Now Be Writing for The Inertia →