Up early for a surf check today.  Wanted to surf Ocean Beach.  OB is my nemesis.  It scares the shit out of me.  It can be one of the heaviest spots on the west coast.  Its known for brutal paddle outs, strong currents, great white sharks, and giant double-overhead barrels.  For the most part, its way over my head.

But there are days when it OB is magic.  Picture perfect a-frames that barrel in both directions.  Easy in and easy out.

Unfortunately, Ive never been lucky enough to coordinate my trips with those days.  This trip was no exception.  OB was crossed up, soft, foggy and windy.  Certainly not worth paddling out and dealing with the current.  Or the sharks.0265

The drive down the coast didnt yield anything better.  Looks like another day out of the water. 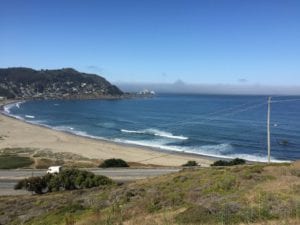 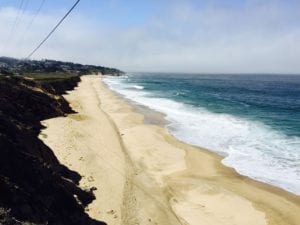 Checked in at Surf Camp Pacifica and everything was running smoothly.  Sun was out and kids were having fun.  There were about 5 whales blowing their spouts in the distance.

Went to pick up the Bus from the shop.  It sounded SO MUCH HAPPIER.  New CV Boots and a new alternator belt eliminate at least two more things that could go wrong.  Tassis did a great job.  Take your air-cooled VW there if you ever need help.  They’re restoring a a classic bubble-top for a local CEO of action sports camera company, whoever that might be.  Cant wait to see what she looks like when she’s done. 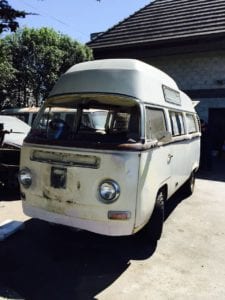 With the bus running right, I headed into the city to meet up with some old friends from my Ecast day.  We met up at Capos, a fairly new Chicago-style pizzeria with a great whiskey selection in North Beach which is owned by Tony Gemignani, who is regularly ranked as Americas #1 pizza chef.  They make a cast iron pan pizza that is the best Ive ever had.  We paired that and an antipasto with a cask strength Rye from Amador Distillery

Joining me were Dave Schmidt, Shepard Jones and Matt Porreca, all former Ecasters.  The big event of the day was that my friend Amy Gubser was swimming with her club, the Locos (most appropriately named I assure you) from the Golden Gate bridge to the Farallon Islands, and back.  It was going to be a 30+ hour relay swim, taking then directly into the most Great White Shark infested waters there are.  The Farallons are a breeding ground for seal lions, which is the preferred meal of the White Shark.

Last night, one of their friends, Aussie Simon Dominguez was stopped 3-miles short of his record setting solo attempt when a big white, which had been circling the boat started heading towards him.

His crew pulled him from the water and that ended his night after 18-hours in the water.

Amy and her team pulled out of San Francisco Bay and headed towards the bridge at 9:30 PM.  They were in the water at 11 and started their swim.  We all held our breath to see how she would make out.

Posted in Only the Road Knows and tagged surf, travel
← Day 5 Big Sur to Santa CruzDay 10 Pacifica to Sonoma →