Monday morning had me jonesing to surf.  I had gotten a tip about a killer wave from Adam at www.ouropenroad.com, and wanted to check it out.  There was a south swell building and I was hopeful that the first real waves of my trip would appear.

This is one of those beaches where if riding a horse on a beach is on your bucket list you can check it off,  that is if you don’t mind riding in a long trail line with inspirited train horses.  Seahorse Ranch in Half Moon Bay is a much better option. 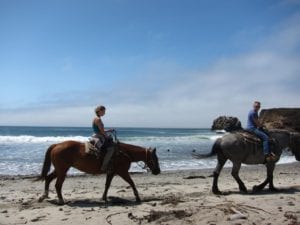 The beach was a mile hike from the parking lot.  It’s a flat hike along a river.  When I made it to the beach, a pretty big set was breaking along the rock, and then formed a perfect left all the way to the beach. 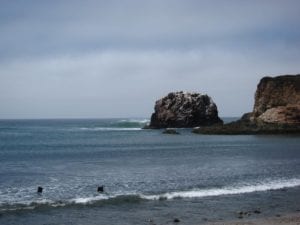 Of course, that was the cue for the other guys to paddle out to the rock and wait.  And sure enough, that set came through. At least someone rode a set wave that day.  All in all it was still a fun session.  There were a bunch of playful sea otter in the water checking me out, the sun was shining and despite the wind it was a beautiful day.

After about 3 hours, I packed up and headed north to Santa Cruz, and hoped to find a spot to camp. I stopped for dinner at a fantastic mexican restaurant in Castroville called Alfonso’s Authentic Mexican Food.  The food is fresh, the tortillas are hand-made, the beer is cold and the chips and salsa are free.  I had the Camerones Vera Cruz, which came with 10 jumbo shrimp.  It was delicious.

The drive to Santa Cruz was uneventful, and rather than hunt for a campsite late at night I decided to push through to the north about 10 miles, where roadside camping is prevalent.  I found a dirt drive that led to a cattle guard and an open gate that said private property. I made sure I camped well before the gate, and turned in for the night.