IAAPA 2019 might go down as the year VR grew up. Last year, operators experienced overwhelm with the selection and varied quality of VR products on the show floor. Most operators were saying “I need a VR. What should I buy?”

This year it was “How much VR makes sense for me?”

This was apparent in the number of exhibitors I spoke with that had breakout shows. Several companies I spoke to had their best show ever.  And even first-time exhibitors had success taking orders. In years past, it was hard to find more than a handful of companies who had great products.  That’s changing rapidly.

After watching VR awards programs ignore companies with amazing products and reward companies with products that were pedestrian at best, I decided to create my own award.  The VR Bobble recognizes innovation and excellence and is awarded to companies that are breaking new ground in location-based virtual reality.  For more information on any of these products, just click the link and you can send an email directly to the company.

I gave the first VR Bobble to Hologate earlier this year, in recognition of their contribution to the VR world in creating the first successful turnkey VR attraction. At IAAPA I gave out four new VR Bobble Awards.

LAI received one for Virtual Rabbids – The Big Ride, which proved to an entire industry that you can create VR that is unattended, and that you can also target younger kids with a VR product and operators can make money. 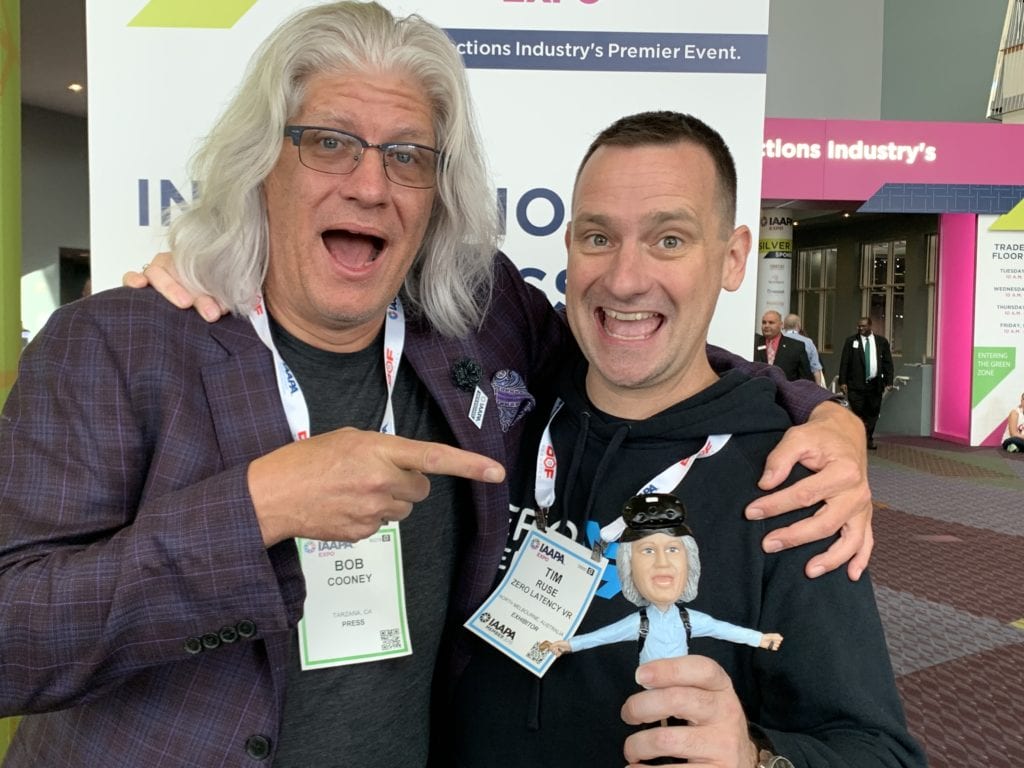 Zero Latency got one for pioneering the warehouse-scale free-roam VR category. They went on to disrupt themselves with their Gen2 product, which is still the class of the free roam segment.

VRsenal received one for creating the first totally automated, unattended VR arcade game cabinet, and pairing it with the top VR game to date, Beat Saber. They created the first arcade video game that operators AND players are excited about in a very long time.

Finally, I awarded a Bobble to Ballast VR, for creating the first truly immersive underwater VR attraction, DIVR. I stripped off my clothes donned board shorts and jumped into a pool in the outdoor exhibit area of IAAPA to give it a whirl. It’s one of the best VR experiences I have ever tried.

(I also ruined my “waterproof” phone by trying to take video of Kevin Williams in the pool, and subsequently lost my photos and videos of the product, hence the company promo video above.)

The VR Bobble has no submission process; you cannot apply.  There is no panel of judges; it’s just me. To win, you need to do something innovative; either showing what can be done so others can follow, or improve upon something that has been done so you move the market.

These products and more are listed in my IAAPA VR Buyers Guide, which you can still download for a limited time here.

As I mentioned above I wrote a VR IAAPA Guide as an overview of what I expected to see at the show. But there were a few surprises.

Triotech released Storm, a two-seat VR motion simulator that tries to build on VR Rabbids – the Big Ride from LAI.  They added Leap Motion hand tracking in an attempt to gamify the experience to create repeatability. Priced at around $50K, time will tell if it provides the same value as its inspiration.

Unis released a two-player motorcycle racer where the headset is optional.  It was priced at under $30K and received great buzz at the show. I was impressed with the smoothness of the game and the lack of motion sickness.  Not all racers make sense to be in VR.  If you’re racing a car, you use mirrors and are focused in front of you. Unless you are in a smash-up derby where you drive backward most of the time, I am not sure VR in a car driver is the best use of VR. Motorcycle racing, however, where you are leaning into the turns and looking over your shoulder, felt like a natural use of the technology.

Raw Thrills announced but didn’t show their upcoming King Kong VR simulator. No word on a release date yet. I will keep you posted as I learn more.

Posted in Dropping In
← What Does the Facebook Acquisition of Beat Saber Mean?Creating Your Own Reality – A Study in Being Homeless →